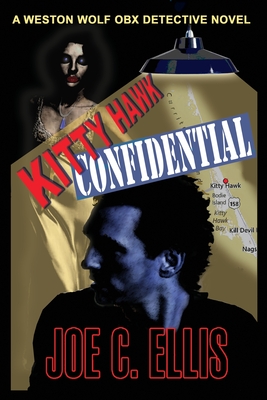 After moving into the oldest beachfront home in Kitty Hawk, Senator Reginald Forsythe hires Detective Weston Wolf to watch over his wife. The senator fears his wife may be possessed by the ghost of a woman who built the house back in 1896, Wolf's assignment is to keep Rebecca Winston Forsythe safe and make sure nothing scandalous happens that would jeopardize Forsythe's political career. Wolf soon discovers the case is more problematic than he ever imagined. Embroiled in an entanglement with the living and the dead, Wolf struggles to unravel a devious plot that places lives and his career in jeopardy.

From the Outer Banks Detective Series that has garnered outstanding praise from reviewers, Joe C; Ellis has again produced a compelling story that captivates the reader from the first page to the last. This third and final book in the series brings the series to a dramatic and fulfilling conclusion. Here are some reviews from the first two books in the series: Roanoke Island Murders and The Singer in the Sound.

The novel's pace quickly accelerates as two murders take place on the same evening. Detective Weston Wolf is hired by a mysterious woman to help her find a missing friend but instead involves him not only in solving the murders but also in assisting her with the sale of a priceless heirloom which has been in her family for centuries. Breathing with the essence of film noir, this contemporary crime novel will hold the reader in its deadly grip till the very end. A real page turner with surprises around every corner A must read.

In this second installment of the Weston Wolf Detective Series set in the sublime Outer Banks, accomplished author Joe C. Ellis takes the reader to the serene coastal town of Corolla, North Carolina to solve a hideous crime of murder and mayhem hidden in the realms of the rich and famous. Our protagonist Detective Weston Wolf and his daring partner Angie Stallone hit the ground running in this fast paced thriller when they are hired to solve the mystery of a missing girl with the voice of an angel, the daughter of an elderly fisherman. While working on solving the crime, Wolf meets the beautiful enigmatic Freyja Beck who is known to be an enchanting singer herself as well as an actress. With the help of Angie and Freyja, Wolf uncovers the dark underbelly of Hollywood when it comes up with more missing girls seeking fame and fortune but finding themselves at the mercy of a deadly killer. Along with the excitement and witty repertoire, the reader will find themselves falling in love with the idyllic descriptions of the Outer Banks. They will revel in the feel of the ocean and take trips to the historical Whalehead Club, walk the Corollian northern beaches of the wild horse sanctuary, and breathe in the brackish air of the Currituck Sound. This novel is a heady pleasure for those who enjoy reading a blend of murder mystery combined with the thrill of the Outer Banks in all its natural beauty. A real must for those who love the old detective film noir novels with a modern slant. Joe C. Ellis has done it again