The Unboring History of the Lady, the Army, and the Fort (Paperback) 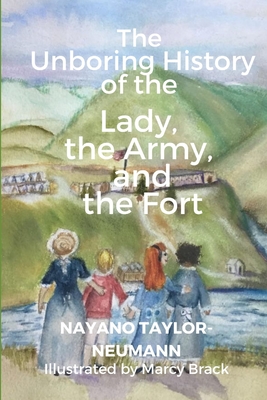 Tilly, Molly, and Tom, the three friends whom we met in the previous Unboring History books, are curious about the plaques and monuments near the site of Fort Cumberland. They get into an argument about women's place in history. Tom declares that there are no important women in the history of America's colonial wars because they were too busy at home with their children. The girls do not agree, and the adventures that the three are taken on proved to them all that there was at least one woman with an important role in the battles between the British and the French in colonial America. The children are transported through history and discover they are following the trail of Charlotte Browne, the first woman ever commissioned into the British army by General Braddock. Braddock was called to the colonies to lead troops against the French, and Mistress Browne left her tiny children in London and sailed to the colonies with the General's army. Braddock's army began their mission from Fort Cumberland, where Charlotte was commissioned to create the Fort Cumberland hospital. The bloody rout of Braddock's army is one of the best-known events in what came to be called the "French and Indian War".The children first meet Mistress Browne in Fort Louisbourg, Nova Scotia, where the girls are roped in to work in the hospital wards. The three meet Charlotte in 18th century London, sail on the ship that carried her and troops to America, trek beside her from Virginia to Fort Cumberland, and experience the hardships and the bloody despair of the rout of Braddock's army. By the end, Tom agrees that there are indeed important women in history.