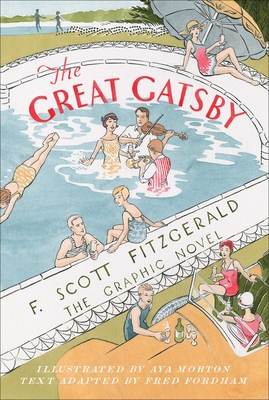 First published in 1925, The Great Gatsby has been acclaimed by generations of readers and is now reimagined in stunning graphic novel form. Jay Gatsby, Nick Carraway, Daisy Buchanan, and the rest of the cast are captured in vivid and evocative illustrations by artist Aya Morton. The iconic text has been artfully distilled by Fred Fordham, who also adapted the graphic novel edition of To Kill a Mockingbird. Blake Hazard, F. Scott Fitzgerald’s great-granddaughter, contributes a personal introduction.

This quintessential Jazz Age tale stands as the supreme achievement of Fitzgerald’s career and is a true classic of 20th-century literature. The story of the mysteriously wealthy Gatsby and his love for the beautiful Daisy is exquisitely captured in this enchanting and unique edition.

F. Scott Fitzgerald was born in St. Paul, Minnesota, in 1896. He attended Princeton University, joined the United States Army during World War I, and published his first novel, This Side of Paradise, in 1920. That same year he married Zelda Sayre and for the next decade the couple lived in New York, Paris, and on the Riviera. Fitzgerald’s masterpieces include The Beautiful and Damned, The Great Gatsby, and Tender Is the Night. He died at the age of forty-four while working on The Last Tycoon. Fitzgerald’s fiction has secured his reputation as one of the most important American writers of the twentieth century.

Aya Morton’s work has been featured in Comics Art by Paul Gravett, exhibited in the London House of Illustration, and has received Awards of Excellence from Communication Arts and an honorable mention from 3x3 Illustration Annual. She is the illustrator of His Dream of the Skyland, the first book in a trilogy written by Anne Opotowsky, and has worked as a freelance artist in London and Portland, Oregon, where she now lives with her husband and two sons.

Fred Fordham has written and illustrated for various publications, most recently adapting and illustrating the graphic novel version of Harper Lee’s To Kill a Mockingbird. He also illustrated Philip Pullman’s debut graphic novel The Adventures of John Blake: Mystery of the Ghost Ship. He lives in London.

"Brings the entire story to life in such vivid, quick-turning pages. The parties, the dresses, the mansions, the green light—all illustrated here beautifully. And it still packs the wallop that the original does!" —Taylor Jenkins Reid, author of Daisy Jones & The Six

"Morton's eye for fashion and interior decor aids the reader in becoming fully immersed in the era, while Fordham's economical reworking of the original text reflects a deep intimacy with Fitzgerald's work." —Shelf Awareness

"Fordham retains much of Fitzgerald’s singular prose, which Morton illustrates with an eye toward period detail and restraint that blossoms into expressive tableaus of vivid color at key moments. Here, Fitzgerald’s incisive exposé of the shallow excesses of the elite feels startlingly fresh nearly 100 years after its original publication." —Library Journal