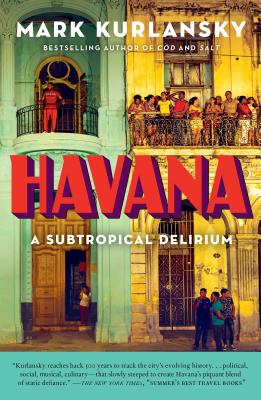 A city of tropical heat, ramshackle beauty, and its very own cadence--a city that always surprises--Havana is brought to pulsing life by New York Times bestselling author Mark Kurlansky.

Award-winning author Mark Kurlansky presents an insider's view of Havana: the elegant, tattered city he has come to know over more than thirty years. Part cultural history, part travelogue, with recipes, historic engravings, photographs, and Kurlansky's own pen-and-ink drawings throughout, Havana celebrates the city's singular music, literature, baseball, and food; its five centuries of outstanding, neglected architecture; and its extraordinary blend of cultures.

Like all great cities, Havana has a rich history that informs the vibrant place it is today--from the native Taino to Columbus's landing, from Cuba's status as a U.S. protectorate to Batista's dictatorship and Castro's revolution, from Soviet presence to the welcoming of capitalist tourism. Havana is a place of extremes: a beautifully restored colonial city whose cobblestone streets pass through areas that have not been painted or repaired since long before the revolution.

Kurlansky shows Havana through the eyes of Cuban writers, such as Alejo Carpentier and José Martí, and foreigners, including Graham Greene and Hemingway. He introduces us to Cuban baseball and its highly opinionated fans; the city's music scene, alive with the rhythm of son; its culinary legacy. Through Mark Kurlansky's multilayered and electrifying portrait, the long-elusive city of Havana comes stirringly to life.

Mark Kurlansky is the New York Times bestselling author of Milk!, Cod, Salt, Paper, The Basque History of the World, 1968, The Big Oyster, International Night, The Eastern Stars, A Continent of Islands, and The White Man in the Tree and Other Stories. He received the Dayton Literary Peace Prize for Nonviolence, Bon Appetit’s Food Writer of the Year Award, the James Beard Award, and the Glenfiddich Award. Salt was a Los Angeles Times Book Prize finalist. He spent ten years as Caribbean correspondent for the Chicago Tribune. He lives in New York City. www.markkurlansky.com.

"A happy hybrid, Havana: A Subtropical Delirium invokes the Cuban capital as an occasion to discuss the country's history, politics, food, architecture, music, religion and passion for baseball . . . Kurlansky approaches Havana like an Impressionist painter, building the image of this metropolis of 2 million inhabitants with subtle brushstrokes." - The Washington Post

"During his decade-long tenure as the Chicago Tribune's Caribbean correspondent in the 1980s, Mark Kurlansky began traveling to Cuba. Since this introduction to the island nation, the journalist grew to know and love the beautiful, messy capital. Drawing on Havana's history, Kurlansky starts with Columbus' arrival in 1492 and examines the city's role in the slave trade and its lasting effects. But he also brings us into the contemporary culture, highlighting the city's lively music, dance and art scenes, and supplying us with recipes to tasty Cuban dishes." - Smithsonian Magazine, "Ten Best Travel Books of 2017"

"This little gem of a book by the prolific Kurlansky is a revelation . . . At a most auspicious moment in the history of Cuba and Havana, Kurlansky, who has spent much time in the country as a journalist, writes an eloquent love letter to one of the world’s great cities." - starred review, Booklist

"This extremely readable book is not preachy, not dogmatic, not shrill. As in life, there is a mixture of both good and evil, and Kurlansky, a frequent Cuba correspondent, covers it well." - starred review, Library Journal

"Warmly rendered and rich with the insights of an observer intimate with his subject, this paean to the city of Havana is as engaging as it is timely. The chapters read like a series of colorful picture postcards, each one a touchstone of Havana’s history and Cuban culture." - Publishers Weekly

"Few countries seem as alluring as this island nation, long cloistered from American travelers, which welcomed its first commercial U.S. flight--from Fort Lauderdale--this past August . . . Havana is Mark Kurlansky's cultural history of a city that he began visiting regularly in the 1980s, when he covered the Caribbean for the Chicago Tribune." - Publishers Weekly, "Spring Travel Books"

"We are in good hands to explore this diabolically alluring city with New York Times bestselling author Mark Kurlansky in Havana: A Subtropical Delirium. His is an insider's view of the ramshackle charm and special cadence of Havana, its tattered and elegant surprises and pulsating fun-loving life." - New York Journal of Books

"Havana is sui generis and addictive, and Mark Kurlansky really gets it." - BookPage

"Biographical portraits of cities are in vogue. This lively addition to the genre is essentially a history . . . Kurlansky found international fame in 1997 with his piscatorial portrait, Cod. The lengthy list of other titles he has penned is enough to make most professional writers want to shoot themselves--not only more than a dozen non-fiction works but novels and children's books as well. The bugger is also an award-winning food writer. Narrative history is his forte, however. His vignettes of the figures who moulded Havana are excellent. The story unfurls through grisly post-independence dictatorships and ends, inevitably, with Castro. Kurlansky is even-handed." - Literary Review

"A highly readable and entertaining account of Cuban history and culture that I found hard to put down." - San Francisco Book Review

"HAVANA is as enjoyable as it is fair, and above all features the beauty and essence of the city that makes it unmistakable. It is a colorful, descriptive piece that any person should warmly enjoy." - Bookreporter.com

"Perfect for anyone headed there or simply wishing to learn more about a city and country cloaked in romance and mystery." - BookFilter

"Havana is an electrifying and multi-layered portrait of the long-elusive city." - BookBrowse

"Not quite a book on the history of Havana, but rather, the history of Havana-isms . . . The result is a book that strays from repeating what most already know about Havana, and instead tells the origins of the city's unique cultural characteristics . . . Kurlansky's guide to Havana is an entertaining collage of the attitudes that have existed throughout its five-century history." - Cuba Trade Magazine