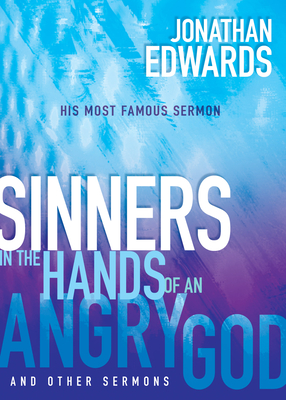 "Christ has thrown the door of mercy wide open," and He stands crying out to all to accept His call. Delivered more than 250 years ago, "Sinners in the Hands of an Angry God" by Jonathan Edwards remains the most famous sermon ever preached in American history. He presents a clear picture of the predicament of every sinner and lukewarm Christian, while showing how we can know we have God's favor, avoid the tricks of the devil, and find our reward in heaven. With compelling words and now-classic imagery, Edwards describes the shaky position of those who do not follow Christ and God's urgent call to receive His love and forgiveness today. This new, updated edition includes two other sermons that demonstrate the great mercy of God as well as Edwards' own pastoral heart: "Pardon for the Greatest of Sinners" and "Many Mansions."

Born in East Windsor, Connecticut, Jonathan Edwards (1703-1758) was the only son of the Reverend Timothy Edwards and Esther Stoddard Edwards. He was a dedicated student and scholar from his early youth, well before he entered Yale University at the age of thirteen. In addition to his scholarly bent, he was philosophical, and he had an appetite for the divine. In 1729, after earning a Master of Divinity from Yale, Edwards succeeded his grandfather, the famed Solomon Stoddard, as full pastor of the First Church of Northampton, Massachusetts. In the twenty-four years that he lived in Northampton, Edwards was deeply concerned with the nature of true religion. He was keenly aware of the fact that true religion had to be lived out, and he set forth to transform his congregation, as well as congregations throughout New England, from believers who only understood Christian doctrine to converted Christians who were truly moved by their beliefs.