Sinners In The Hands of An Angry God: including "Turn or Burn" by C. H. Spurgeon (Paperback) 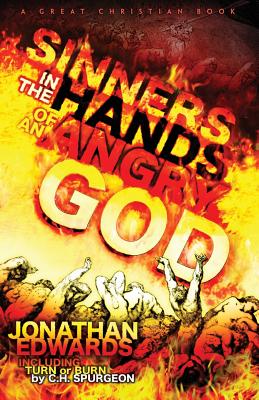 Jonathan Edwards' sermon Sinners in the Hands of an Angry God is arguably the most famous sermon ever preached. It is an eloquent but passionate plea to take God's displeasure with man as the dire circumstance that it is. A profound love for sinners and a pastor's heart motivated Edwards to preach this immortal address, a message as relevant today as it was then. His comprehensive urging of "natural man" to be born again is a masterful exercise in addressing all arguments that God's judgment and condemnation of sinners to hell can be averted by any effort of mankind. He speaks of man's schemes and man's wisdom as utter foolishness. Edwards backs up every claim he makes with Holy Scripture. He well knows that there are people in the very congregation he is speaking to that will scoff and rebelliously turn their deaf ear to it and thereby die without excuse. How about you dear reader? Will you harken to God's fervent plea to you through His faithful servant Jonathan Edwards and be saved by His grace? Will you rejoice in the power, love and mercy of God, and no longer be bound by fear of death? To read this minister's powerful warnings offers yet another chance to be saved from a God that is both justly angry over sin and yet still willing, able and ready to save us through the atoning death of His dear Son the Lord Jesus Christ. The message is a fiery one, but that's the point. Read it and live As an added bonus this edition also includes the famous address by C. H. Spurgeon, "Turn or Burn".

Jonathan Edwards (October 5, 1703 - March 22, 1758) was a preacher, theologian, and missionary to Native Americans. Edwards is widely acknowledged to be America's most important and original philosophical theo- logian, and one of America's greatest intellectuals. Edwards's theological work is very broad in scope, but he is often associated with his defense of Reformed Theology, the metaphysics of theological determinism, and the Puritan heritage. Recent studies have emphasized how thoroughly Edwards grounded his life's work on conceptions of beauty, harmony, and ethical fittingness, and how central The Enlightenment was to his mindset. Edwards played a critical role in shaping the First Great Awakening, and oversaw some of the first fires of revival in 1733-1735 at his church in Northampton, Massachusetts. Edwards's sermon Sinners in the Hands of an Angry God, is considered a classic of early American literature, which he delivered during another wave of revival in 1741, following George Whitefield's tour of the Thirteen Colonies. Edwards is widely known for his many books: The End For Which God Created the World; The Life of David Brainerd, which served to inspire thousands of missionaries throughout the nineteenth century; and Religious Affections, which many Reformed Evangelicals read even today. Edwards died from a smallpox inoculation shortly after beginning the presidency at the College of New Jersey (later to be named Princeton University), and was the grandfather of Aaron Burr.