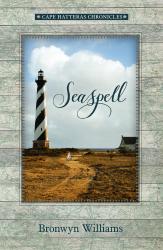 Remote doesn’t begin to describe Cape Hatteras, the island off the coast of North Carolina, where Mariah has taken a teaching job. Murfreesboro is not that far, as the crow files, from Hatteras Island. But in the late 1800s the trip means a train ride, followed by several boat rides. And the wind-swept island might as well be on another continent as far as the culture goes. The accent sounds like another language and the lack of electricity makes the night sky light up with stars as if it were a planetarium.
For all of the rugged discomfort, Mariah is soon charmed by the locals. Walking the sand paths becomes a pleasant way to explore the village. The ocean turns out to be far less frightening when the pounding waves lie down. Wading in the clear water is a cool balm on beastly hot days.
Return to the days when the majestic Cape Hatteras Light was fueled by kerosene, hauled up the 268 steps in 5 gallon containers. When storm tides regularly washed over the flats and inundated houses. Where animals were fenced out, not in, and wild ponies roamed free.