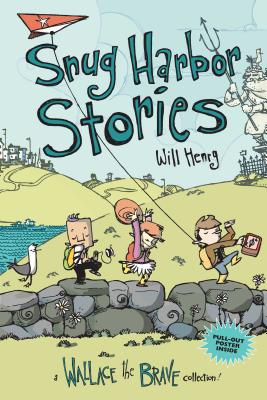 The follow up to the Eisner-nominated collection of Wallace the Brave comics, featuring beautifully illustrated scenes of childhood imagination, friendship, outdoor exploration, and adventure.

Think "Peanuts" if Charlie Brown were less of a mope or "Calvin & Hobbes" if Calvin weren't a bit of a psychopath. "Wallace The Brave" is about a family. There's Dad, a fisherman, Mom, a gardener, their almost feral young son Sterling, who never met a bug he wouldn't eat, and his older brother Wallace, a rambunctious, imaginative kid big on exploring. Mostly we see the world of the strip through Wallace's eyes, a sleepy East Coast beach town called Snug Harbor where the streets are lined with ice cream shops and the beaches are dotted with rocky tide pools ... The world of childhood depicted in the strip is a timeless, outdoorsy one reminiscent of strips like "Calvin & Hobbes" and "Cul De Sac," both of which Henry cites as influences. — NPR's Glen Weldon

Will Henry is the creator behind Ordinary Bill and Wallace the Brave, both distributed on GoComics.com. His professional career began with his strip Room Mates, which was published in The Daily Campus during his time at the University of Connecticut. He draws his inspiration from everyday life and in the age of the smart-phone, he aims to re-create a world in which kids “still collect bugs and fly kites and eat ice cream cones upside-down.” He lives in Rhode Island with his wife, his cat, and his mistress, the sea.

“100% delightful humor you’ll want to read again and again. If you love to laugh, this is your next book.” (Imagination Soup)

"Henry cites Calvin and Hobbes as an influence, and the similarities are clear. Though lovable, self-assured Wallace is a worthy successor to Calvin, he’s a strong hero in his own right, and Wallace the Brave is bound to be a future classic.” (School Library Journal)