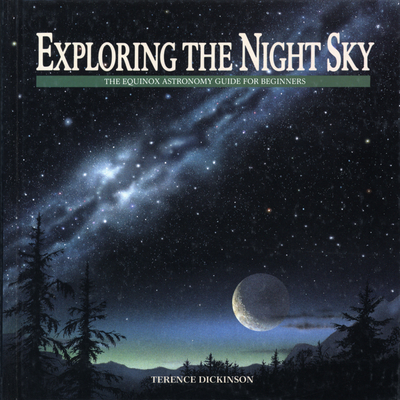 Exploring the Night Sky is aimed at novice star gazers anxious to expand their astronomical repertoire beyond the Big and Little Dippers. Dickinson has designed a superb introduction to astronomy that is clear, concise, beautifully illustrated and very user friendly no matter what the child's age.

The book is divided into three sections. The first is a 10-step voyage from the Earth's vicinity to the distant reaches of the universe. Organized by increasing distance from the Earth, it touches on the Moon, Mars, Pluto, comets, the three stars of Alpha Centauri, the center of the Milky Way, the Large Magellanic Cloud, the Andromeda Galaxy, and vantage points at 10,000,000 light-years from Earth and 300,000,000 light-years from Earth.

The second section, Alien Vistas, is a sequence of 10 close-up looks at some of the most interesting objects mentioned in the first section, including all the planets of the solar system, stars, black holes and quasars, and makes speculations about extraterrestrial life.

The final section is a guide to viewing the night sky, which enables readers to go outside on any clear night of the year and identify celestial objects. There is a glossary with explanations of unfamiliar terms and for pronunciations.

Exploring the Night Sky is a clearly written, well-illustrated introduction to astronomy for anyone interested in the universe around us.

Terence Dickinson is a prolific science writer specializing in astronomy. More than one million copies of his books are in print. He is the recipient of many national and international science awards, including the New York Academy of Sciences Book of the Year Award and the Royal Canadian Institute's Sandford Fleming Medal. He lives near Kingston, Ontario, and is the author of NightWatch and The Backyard Astronomer's Guide.