Nowhere to Remember: Hanford, White Bluffs, and Richland to 1943 (Paperback) 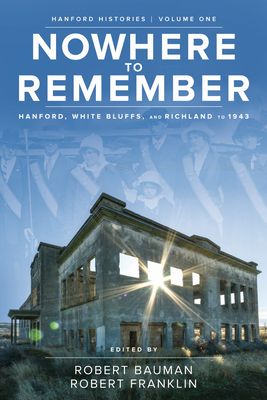 "There wasn't that many people, but they were good people."--Madeline Gilles

"First time I ever tasted cherries or even seen a cherry tree was in White Bluffs]. Or ever ate an apricot or seen an apricot...It was covered with orchards and alfalfa fields."--Leatris Boehmer Reid

Euro-American Priest River Valley settlers turned acres of sagebrush into fruit orchards. Although farm life required hard work and modern conveniences were often spare, many former residents remember idyllic, close-knit communities where neighbors helped neighbors. Then, in 1943, families received forced evacuation notices. "Fruit farmers had to leave their crops on their trees. And that was very hard on them, no future, no money...they moved wherever they could get a place to live," Catherine Finley recalled. Some were given just thirty days, and Manhattan Project restrictions meant they could not return.

David W. Harvey examines the impact of wagon trade, steamships, and railroads, grounding local history within the context of American West history. Robert Franklin details the tight bonds between early residents as they labored to transform scrubland into an agricultural Eden. Laura Arata considers the early twentieth century experiences of women who lived and worked in the region. Robert Bauman utilizes oral histories to tell forced removal stories. Finally, Bauman and Franklin convey displaced occupants' reactions to their lost spaces and places of meaning--and explore ways they sought to honor their heritage.