Invasive Pythons in the United States: Ecology of an Introduced Predator (Paperback) 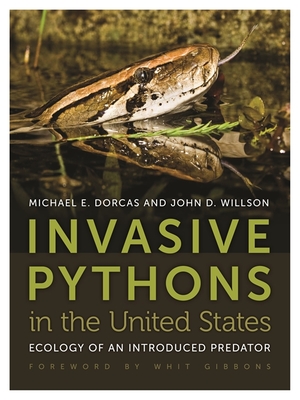 Most people think of pythons as giant snakes in distant tropical jungles, but Burmese pythons, which can reach lengths of over twenty feet and weigh over two hundred pounds, are now thriving in southern Florida.

These natives of Asia are commonly kept as pets and presumably escaped or were released in the Everglades. Pythons are now common in this region; widespread throughout hundreds of square miles, they are breeding and appear to be expanding their range. Pythons are voracious predators that feed on a variety of native wildlife including wading birds, bobcats, white-tailed deer, and even alligators. Their presence has drawn dramatic media attention and stoked fears among the public that pythons may threaten not just native species but humans as well. Despite this widespread concern, information on pythons has been limited to a few scientific publications and news coverage that varies widely in fact and accuracy. With Invasive Pythons in the United States, Michael E. Dorcas and John D. Willson provide the most reliable, up-to-date, and scientifically grounded information on invasive pythons. Filled with over two hundred color photographs and fifteen figures and maps, the book will help general readers and the scientific community better understand these fascinating animals and their troubling presence in the United States. Features information on general python biology biology of Burmese pythons in their native range research on pythons in the United States history and status of introduced pythons in Florida risks pythons pose in Florida and elsewhere methods to control python populations other boas and pythons that may become or are already established in the United States

Mike Dorcas (Author) MIKE DORCAS is a herpetologist and author of numerous books, including Invasive Pythons in the United States (coauthored with John D. Willson), and Snakes of the Southeast and Frogs and Toads of the Southeast (coauthored with Whit Gibbons). John D. Willson (Author) JOHN D. WILLSON is a postdoctoral research associate at Virginia Polytechnic and State University. He has published exten-sively on snake ecology and serves as a section editor for Snake Natural History notes in the journal Herpetological Review.

"Invasive Pythons in the United States: Ecology of an Introduced Predator might be the title of a great new horror film instead of the well-researched, professional yet entertaining book that it is."—Whit Gibbons, Aiken Standard

"This meticulously researched and profusely illustrated work shines a spotlight on the dangers caused by introduction of non-native pythons into South Florida while providing a comprehensive account of what we know about the ecology of Burmese pythons, both in the United States and in their native range. This book will be of considerable interest to a wide range of readers including scholars, researchers, outdoors people, wildlife enthusiasts, and those concerned about the environmental and human threats posed by this invasive species in the United States."—Russell A. Mittermeier, President, Conservation International, and Vice President, IUCN

"Invasive species come in all shapes and sizes—but few biological invaders are as dramatic as giant pythons. In this magnificently illustrated book, two accomplished snake biologists separate fact from fiction, and provide a user-friendly but scientifically rigorous account of how the pythons got to the USA, what we know about these troublesome aliens, and what impacts they are likely to have on the complex ecosystems of the Everglades and beyond."—Rick Shine, University of Sydney

"The amount of misinformation and hysteria surrounding the discovery of viable populations of large pythons has been mind-boggling. This text provides a serious, scientifically-valid overview of an important ecological problem and will be a welcome addition to the bookshelf of scientists and non-scientists alike."—Richard Seigel, Professor and Chair, Department of Biological Sciences, Towson University

“Michael E. Dorcas and John D. Willson provide a much-needed examination of the growing impact of Burmese pythons as an invasive species in the United States. By highlighting the many dangers and detrimental effects the introduction of non-native pythons has caused in the Everglades, this book documents the mounting threat which invasives pose to ecosystems everywhere. The first book to focus solely on this issue, Invasive Pythons is well-researched, well-illustrated, and well-timed.”—Edward O. Wilson, University Research Professor, Harvard University

"If we needed another cautionary tale of the damage to Florida's ecosystem the introduction of exotic species can cause, this work should persuade any skeptic on the issue."—Tom Palmer, The Ledger