Ghost Ship of Diamond Shoals: The Mystery of the Carroll A. Deering (Paperback) 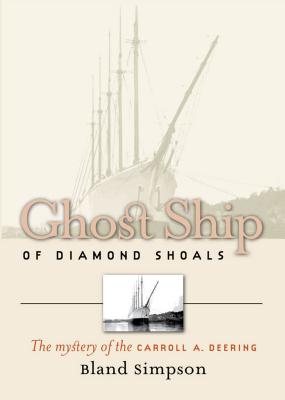 In the misty dawn of January 31, 1921, a Coast Guardsman on watch at the Cape Hatteras Life-Saving Station sighted a mighty five-masted schooner, all sails set, wrecked on the treacherous Diamond Shoals. Rescuers rushed to the ship, but when they arrived they found the Carroll A. Deering deserted, with no trace of the captain, Willis B. Wormell, or the crew. When, several months later, a bottle was found on a nearby beach, purportedly containing a note from a crew member who ascribed the schooner's fate to its capture by pirates, a sensational panic in international shipping ensued. The captain's daughter successfully lobbied for a federal investigation, but months of inquiry failed to turn up either the missing crew or a reason for the ship's demise. To this day, the fate of the Deering has remained one of the greatest mysteries of maritime history.

Bland Simpson assembles the known facts into a compelling reconstruction of the Carroll A. Deering's final voyage and its baffling aftermath. Using contemporary sources including newspapers, FBI reports, ship's logs, and personal and official correspondence, he weaves together historical narrative with the voices of key participants in the drama. Simpson's haunting chronicle keeps the story of the Deering alive, an apt memorial to the ghost ship and its lost crew.

The extraordinary wreck of a majestic ship, a mysteriously missing crew, a message in a bottle, the lost captain's determined daughter--these are all elements of a great sea yarn, and one that happens to be true. Bland Simpson weaves them together in this compelling nonfiction novel, his reconstruction of a ghost ship's final voyage in 1921 and its baffling aftermath. To this day, the fate of the Carroll A. Deering has remained one of the great mysteries of maritime history. Simpson's haunting chronicle keeps the story alive, an apt memorial to the ghost ship and its lost crew.