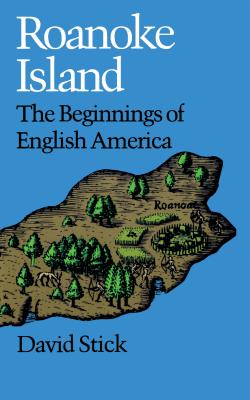 Well before the Jamestown settlers first sighted the Chesapeake Bay or the Mayflower reached the coast of Massachusetts, the first English colony in America was established on Roanoke Island. David Stick tells the story of that fascinating period in North Carolina's past, from the first expedition sent out by Sir Walter Raleigh in 1584 to the mysterious disappearance of what has become known as the lost colony.

Included in the colorful cast of characters are the renowned Elizabethans Sir Francis Drake and Sir Richard Grenville; the Indian Manteo, who received the first Protestant baptism in the New World; and Virginia Dare, the first child born of English parents in America. Roanoke Island narrates the daily affairs as well as the perils that the colonists experienced, including their relationships with the Roanoacs, Croatoans, and the other Indian tribes. Stick shows that the Indians living in northeastern North Carolina -- so often described by the colonists as savages -- had actually developed very well organized social patterns.

The fate of the colonists left on Roanoke Island by John White in 1587 is a mystery that continues to haunt historians. A relief ship sent in 1590 found that the settlers had vanished. Stick makes available all of the evidence on which historians over the centuries have based their conjectures. Methodically reconstructing the facts -- and exposing the hoaxes -- he invites readers to draw their own conclusions concerning what happened.

Exploring the significance of that first English settlement in the New World, Stick concludes that speculation over the fate of the lost colony has overshadowed the more important fact that the Roanoke Island colonization effort helped prepare for the successful settlement of Jamestown two decades later. "Had it been otherwise," he contends, " those of us living here today might well be speaking Spanish instead of English."

The four hundredth anniversary of the exploration and settlement of what came to be called North Carolina occurred in 1984. For that occasion, America's Four Hundredth Anniversary Committee commissioned this factual and readable history.