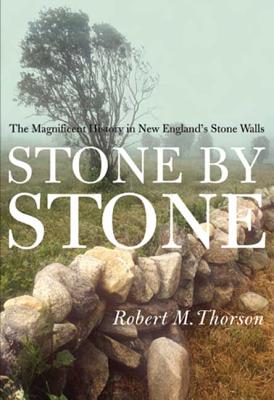 There once may have been 250,000 miles of stone walls in America's Northeast, stretching farther than the distance to the moon. They took three billion man-hours to build. And even though most are crumbling today, they contain a magnificent scientific and cultural story—about the geothermal forces that formed their stones, the tectonic movements that brought them to the surface, the glacial tide that broke them apart, the earth that held them for so long, and about the humans who built them.

Stone walls tell nothing less than the story of how New England was formed, and in Robert Thorson's hands they live and breathe. "The stone wall is the key that links the natural history and human history of New England," Thorson writes. Millions of years ago, New England's stones belonged to ancient mountains thrust up by prehistoric collisions between continents. During the Ice Age, pieces were cleaved off by glaciers and deposited—often hundreds of miles away—when the glaciers melted. Buried again over centuries by forest and soil buildup, the stones gradually worked their way back to the surface, only to become impediments to the farmers cultivating the land in the eighteenth century, who piled them into "linear landfills," a place to hold the stones. Usually the biggest investment on a farm, often exceeding that of the land and buildings combined, stone walls became a defining element of the Northeast's landscape, and a symbol of the shift to an agricultural economy.

Stone walls layer time like Russian dolls, their smallest elements reflecting the longest spans, and Thorson urges us to study them, for each stone has its own story. Linking geological history to the early American experience, Stone by Stone presents a fascinating picture of the land the Pilgrims settled, allowing us to see and understand it with new eyes.

Robert M. Thorson—scientist, teacher, writer— is Professor of Geology at the University of Connecticut, where he holds a joint appointment between the Department of Ecology and Evolutionary Biology (EEB) and the Department of Anthropology, with additional responsibilities to the Honors Program and the Integrated Geosciences Program. He teaches courses, advises students, performs sponsored research, serves on committees, and provides articles, reviews and interviews. Beyond the classroom, he writes a weekly Thursday column for The Hartford Courant, and coordinates the Stone Wall Initiative, now in the process of being incorporated into the Connecticut State Museum of Natural History (Connecticut Archaeology Center). He is a member of the American Association for the Advancement of Science, the American Geophysical Union, The Geological Society of America, and the Connecticut Academy of Arts and Science.