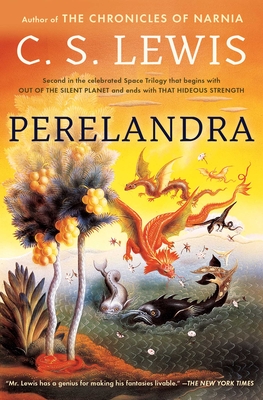 This is book number 2 in the The Space Trilogy series.

The second book in C. S. Lewis's acclaimed Space Trilogy, which also includes Out of the Silent Planet and That Hideous Strength, Perelandra continues the adventures of the extraordinary Dr. Ransom. Pitted against the most destructive of human weaknesses, temptation, the great man must battle evil on a new planet -- Perelandra -- when it is invaded by a dark force. Will Perelandra succumb to this malevolent being, who strives to create a new world order and who must destroy an old and beautiful civilization to do so? Or will it throw off the yoke of corruption and achieve a spiritual perfection as yet unknown to man? The outcome of Dr. Ransom's mighty struggle alone will determine the fate of this peace-loving planet.

C.S. Lewis was a professor of medieval and Renaissance literature at Oxford and Cambridge universities who wrote more than thirty books in his lifetime, including The Screwtape Letters, The Chronicles of Narnia, and Mere Christianity. He died in 1963.

The New York Times Mr. Lewis has a genius for making his fantasies livable.

Commonweal Writing of the highest order. Perelandra is, from all standpoints, far superior to other tales of interplanetary adventures.

The New Yorker If wit and wisdom, style and scholarship are requisites to passage through the pearly gates, Mr. Lewis will be among the angels.

Los Angeles Times Lewis, perhaps more than any other twentieth-century writer, forced those who listened to him and read his works to come to terms with their own philosophical presuppositions.