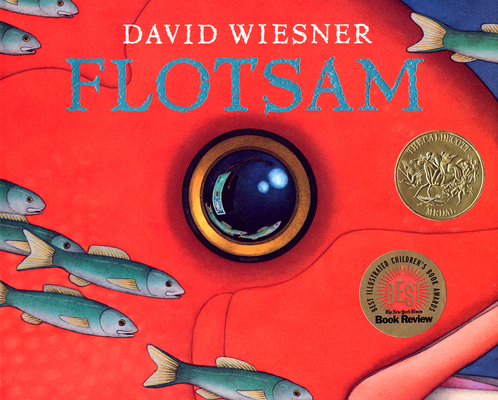 In this extraordinary Caldecott Medal winner and New York Times bestseller by David Wiesner, a beach day is the springboard to a wildly imaginative exploration of fantastical mysteries of the deep—and of human connections through time.

A young boy comes to the beach eager to collect and examine flotsam—anything floating that has been washed ashore. But nothing among his usual finds compares with the discovery of a barnacle-encrusted underwater camera with its own secrets to share...and to keep.

Meet unexpected underseas denizens and enter fascinating worlds within worlds in this entrancing celebration of imagination, creativity, and the impulse to share that which delights and amazes us.

David Wiesner has been awarded the Caldecott Medal three times, for Flotsam in 2007, The Three Pigs in 2002, and Tuesday in 1992. He has received the Caldecott Honor twice, for Sector 7 in 2000 and Free Fall in 1989. Free Fall is the first title he both authored and illustrated. His cover art now graces The Chronicles of Narnia by C. S. Lewis. Among many other accolades, David has been nominated for the Hans Christian Andersen Award.

"In Wiesner's much-honored style, the paintings are cinematic, coolly restrained and deliberate...An invitation not to be resisted."

"Wiesner continues to show children that things aren't always what they seem. Would the Caldecott committee consider a three-peat?"
— BookPage

"Wiesner returns with his traditional wordless-narrative format for another fantastical outing." — Bulletin of the Center for Children’s Books