A Short Bright Flash: Augustin Fresnel and the Birth of the Modern Lighthouse (Hardcover) 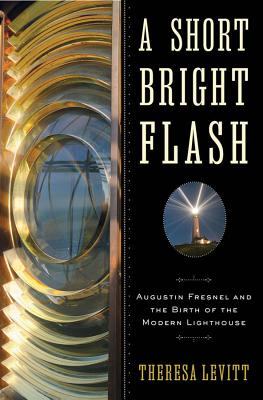 How a scientific outsider came up with a revolutionary theory of light and saved untold numbers of lives.

Augustin Fresnel (1788–1827) shocked the scientific elite with his unique understanding of the physics of light. The lens he invented was a brilliant feat of engineering that made lighthouses blaze many times brighter, farther, and more efficiently. Battling the establishment, his own poor health, and the limited technology of the time, Fresnel was able to achieve his goal of illuminating the entire French coast. At first, the British sought to outdo the new Fresnel-equipped lighthouses as a matter of national pride. Americans, too, resisted abandoning their primitive lamps, but the superiority of the Fresnel lens could not be denied for long. Soon, from Dunkirk to Saigon, shores were brightened with it.  The Fresnel legacy played an important role in geopolitical events, including the American Civil War. No sooner were Fresnel lenses finally installed along U.S. shores than they were drafted: the Union blockaded the Confederate coast; the Confederacy set about thwarting it by dismantling and hiding or destroying the powerful new lights.


Levitt’s scientific and historical account, rich in anecdote and personality, brings to life the fascinating untold story of Augustin Fresnel and his powerful invention.

Theresa Levitt held the McDonnell-Barksdale Chair of History of Science at the University of Mississippi and is associate professor of history there. A graduate of the Massachusetts Institute of Technology, she has a master’s degree in history from Iowa State University and a PhD from Harvard University. She was the recipient of a National Science Foundation grant and a Fulbright IIE Graduate Research Fellowship, among other honors. She is the author of numerous articles and papers on a variety of scientific subjects.

Theresa Levitt interweaves the personal triumph of the French physicist Augustin Fresnel with his pathbreaking work on the nature of light in her fascinating recounting of how the coasts of the world were made safe for the world’s seafaring vessels through a mix of genius, ingenuity, and perseverance. The story has a fascinating American coda.
— Joyce Appleby, professor of history emerita, UCLA, and author of The Relentless Revolution: A History of Capitalism

It is rare that we see a lighthouse-related book, historical in nature, with the level of research that was put into A Short Bright Flash. Theresa Levitt’s superior work has illustrated the genius and ongoing legacy of Augustin Fresnel, whose brilliance not only saved lives but had an everlasting impact on the development of world trade, and whose advanced ideas are still implemented in today’s modern culture.

With his frantic pace of invention and early death, “he’s just like those romantic heroines of 1830s Paris burning themselves up through their passions,” said the historian Theresa Levitt, whose new book is A Short Bright Flash: Augustin Fresnel and the Birth of the Modern Lighthouse.

Fresnel indeed lit up his country and the world.
— Joanne Baker - Nature

[F]ascinating book…Levitt’s writing captures the mix of scientific rigor and cultural shifts in a way that mirrors the sea voyages of the day—a journey fraught with uncertainty, but in the end, guided to success by Fresnel’s lighthouse lenses.
— Matthew Tiffany - Minneapolis Star Tribune

University of Mississippi history professor Levitt details the birth and golden age of a maritime icon in this fascinating book.
— Publishers Weekly