Coming into the Country (Paperback) 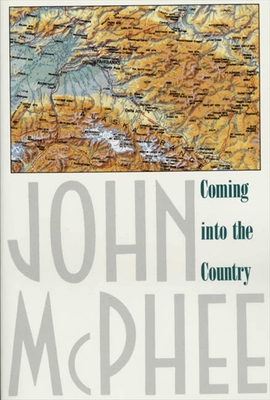 Coming into the Country is an unforgettable account of Alaska and Alaskans. It is a rich tapestry of vivid characters, observed landscapes, and descriptive narrative, in three principal segments that deal, respectively, with a total wilderness, with urban Alaska, and with life in the remoteness of the bush.

Readers of McPhee's earlier books will not be unprepared for his surprising shifts of scene and ordering of events, brilliantly combined into an organic whole. In the course of this volume we are made acquainted with the lore and techniques of placer mining, the habits and legends of the barren-ground grizzly, the outlook of a young Athapaskan chief, and tales of the fortitude of settlers—ordinary people compelled by extraordinary dreams. Coming into the Country unites a vast region of America with one of America's notable literary craftsmen, singularly qualified to do justice to the scale and grandeur of the design.

John McPhee was born in Princeton, New Jersey, and was educated at Princeton University and Cambridge University. His writing career began at Time magazine and led to his long association with The New Yorker, where he has been a staff writer since 1965. Also in 1965, he published his first book, A Sense of Where You Are, with Farrar, Straus and Giroux, and in the years since, he has written over 30 books, including Oranges (1967), Coming into the Country (1977), The Control of Nature (1989), The Founding Fish (2002), Uncommon Carriers (2007), and Silk Parachute (2011). Encounters with the Archdruid (1972) and The Curve of Binding Energy (1974) were nominated for National Book Awards in the category of science. McPhee received the Award in Literature from the Academy of Arts and Letters in 1977. In 1999, he was awarded the Pulitzer Prize for Annals of the Former World. He lives in Princeton, New Jersey.

“It is a reviewer's greatest pleasure to ring the gong for a species of masterpiece.” —Edward Hoagland, The New York Times Book Review

“Justly celebrated…By showing us what Alaska is like, McPhee reminds us of what we have become.” —The Washington Post Book World

“What is really in view in Coming into the Country is a matter not usually met in works of reportage . . . nothing less than the nature Of the human condition.” —Benjamin De Mott, The Atlantic Monthly

“McPhee has acted as an antenna in a far-off place that few will see. He has brought back a wholly satisfying voyage of spirit and mind.” —Paul Grey, Time

“With this book McPhee proves to be the most versatile journalist in America.” —Editor's Choice, The New York Times