Atlas of Lost Cities: A Travel Guide to Abandoned and Forsaken Destinations (Hardcover) 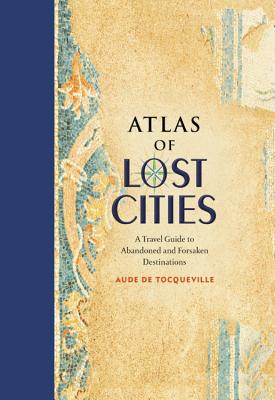 Cities are mortal, but the traces they leave behind tell a fascinating story. In Atlas of Lost Cities, an accomplished travel writer reveals the rise and fall of notable places, each pithy portrait illuminated by a vintage map that puts armchair explorers right in the scene. Wander with care through:

With each map are fantastical illustrations that help the reader envision these hubs as they were in their prime. A perfect gift for the traveler who believes he or she has seen it all.

"Features well-known lost cities like Pompeii and Angkor, but also explores lesser-known, but similarly majestic places.... Each destination is accompanied by an account of its history and mythology, and a beautifully detailed illustration by Karin Doering-Froger."—Atlas Obscura

"For history buffs, mystery fanatics, and travel junkies alike, The Atlas of Lost Cities is a highly entertaining read filled with stories of the world's forgotten destinations."—GoNomad

"[A] eulogy for ancient and modern cities that fell to crises both man-made and natural. The illustrations depict the cities before their nadir-somewhere between thriving and decimation."—Citylab.com