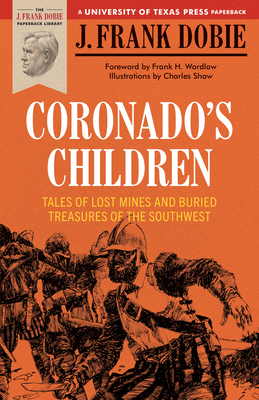 Written in 1930, Coronado's Children was one of J. Frank Dobie's first books, and the one that helped gain him national prominence as a folklorist. In it, he recounts the tales and legends of those hardy souls who searched for buried treasure in the Southwest following in the footsteps of that earlier gold seeker, the Spaniard Coronado.

"These people," Dobie writes in his introduction, "no matter what language they speak, are truly Coronado's inheritors.... l have called them Coronado's children. They follow Spanish trails, buffalo trails, cow trails, they dig where there are no trails; but oftener than they dig or prospect they just sit and tell stories of lost mines, of buried bullion by the jack load... "

This is the tale-spinning Dobie at his best, dealing with subjects as irresistible as ghost stories and haunted houses.

As entrancing a volume as one is likely to pick up in a month of Sundays.
— The New York Times

Dobie has discovered for us a native Arabian Night.
— Chicago Evening Post

This is the best work ever written on hidden treasure, and one of the most fascinating books on any subject to come out of Texas.
— Basic Texas Books