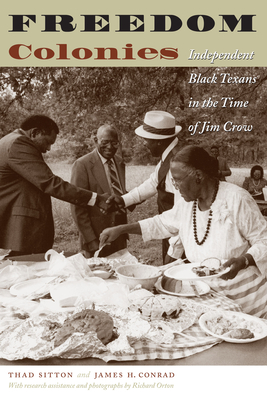 In the decades following the Civil War, nearly a quarter of African Americans achieved a remarkable victory—they got their own land. While other ex-slaves and many poor whites became trapped in the exploitative sharecropping system, these independence-seeking individuals settled on pockets of unclaimed land that had been deemed too poor for farming and turned them into successful family farms. In these self-sufficient rural communities, often known as "freedom colonies," African Americans created a refuge from the discrimination and violence that routinely limited the opportunities of blacks in the Jim Crow South.

Freedom Colonies is the first book to tell the story of these independent African American settlements. Thad Sitton and James Conrad focus on communities in Texas, where blacks achieved a higher percentage of land ownership than in any other state of the Deep South. The authors draw on a vast reservoir of ex-slave narratives, oral histories, written memoirs, and public records to describe how the freedom colonies formed and to recreate the lifeways of African Americans who made their living by farming or in skilled trades such as milling and blacksmithing. They also uncover the forces that led to the decline of the communities from the 1930s onward, including economic hard times and the greed of whites who found legal and illegal means of taking black-owned land. And they visit some of the remaining communities to discover how their independent way of life endures into the twenty-first century.

Thad Sitton is an independent historian and writer in Austin, Texas, who focuses on the social history of rural Texas in the late nineteenth and early twentieth centuries.

Thad Sitton and James H. Conrad have made an important contribution to African American and southern history with their study of communities fashioned by freedmen in the years after emancipation.
— Journal of American History