The Third Coast: When Chicago Built the American Dream (Paperback) 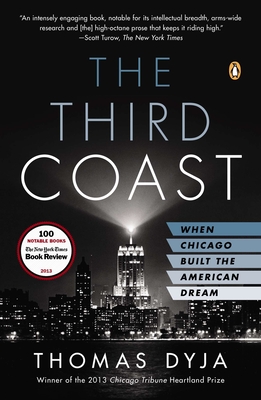 A critically acclaimed history of Chicago at mid-century, featuring many of the incredible personalities that shaped American culture

Before air travel overtook trains, nearly every coast-to-coast journey included a stop in Chicago, and this flow of people and commodities made it the crucible for American culture and innovation. In luminous prose, Chicago native Thomas Dyja re-creates the story of the city in its postwar prime and explains its profound impact on modern America—from Chess Records to Playboy, McDonald’s to the University of Chicago. Populated with an incredible cast of characters, including Mahalia Jackson, Muddy Waters, Howlin’ Wolf, Chuck Berry, Sun Ra, Simone de Beauvoir, Nelson Algren, Gwendolyn Brooks, Studs Turkel, and Mayor Richard J. Daley, The Third Coast recalls the prominence of the Windy City in all its grandeur.

Thomas Dyja is the author of three novels and two works of nonfiction. A native of Chicago’s Northwest Side, he was once called “a real Chicago boy” by Studs Turkel. He now lives in New York City.

Chicago Tribune:
"The Third Coast is deeply researched, thoroughly thought-out, exquisitely structured and beautifully written — an essential for any lover of Chicago and American history.”

Scott Turow, The New York Times:
"An intensely engaging book, notable for its intellectual breadth, arms-wide research and [the] high-octane prose that keeps it riding high..."

New York Times Book Review (cover):
"[A] robust cultural history… Dyja zooms in on the qualities Chicagoans value and does it better than anyone else I've read."

Vanity Fair:
"A rollicking cultural history… What's a given now was often given by Chicago: high-rises, gospel and the blues, TV talk shows, Playboy, McDonalds, sketch comedy…Was it all dazzling coincidence or, as Dyja suggests, something in the water?"

Chicago Tribune:
"The Third Coast… has an elegant, unflinching, non-nostalgic clarity… a new touchstone in Chicago literature… an ambitious history lesson no one had written."

Seattle Times:
"My God, how I enjoyed this book… The Third Coast offers a deeper perspective, detailing Chicago’s midcentury contributions to literature, music, theater, photography, television and architecture… The book is an extraordinarily good read, with writing that sparkles."

The Huntington News:"An exceedingly entertaining book...The Third Coast is mandatory reading for anyone who wants to understand Chicago -- and by extension the creation of post WWII urban America. On top of that, it's supremely readable. An unbeatable combination."

Booklist (starred review):
"[A] robust, outspoken, zestfully knowledgeable, and seductively told synthesis of biography, culture, politics, and history…[written] with velocity, wry wit, and tough lyricism… Dyja focuses on the years between the Great Depression and 1960... As vibrant and clarifying as his overarching vision is, what makes this such a thrilling read are Dyja’s fresh and dynamic portraits not only of the first Mayor Daley and his machine but also of key artists and innovators who embodied or amplified Chicago’s earthiness, grit, audacity, and beauty… from the city’s epic political corruption, vicious racism, and ethnic enclaves to the ferment that gave rise to world-changing architecture, urban blues and gospel, McDonald’s, improv comedy, and the 'birth of television.' Here is the frenetic simultaneity of an evolving city torn between its tragic crimes and failings and tensile strength and creativity."

Publishers Weekly (starred):
"A magisterial narrative of mid-20th century Chicago... a luminous, empathetic, and engrossing portrait of a city."

Kirkus Reviews:
"A readable, richly detailed history of America's second city-which, laments novelist/historian and Chicagoan Dyja has become a third city, perhaps even less. A valuable contribution to the history of Chicago, worthy of a place alongside William Cronon's Nature's Metropolis."

Kurt Andersen, author of True Believers:
"I am an American, not Chicago-born, but at age nine Chicago was the first big city I visited, and it was love at first sight. I've come to know it deeply, however, only through its writers: Saul Bellow, Richard Wright, Studs Terkel, Mike Royko—and now Thomas Dyja. The Third Coast is a vivid, fascinating, surprising, altogether masterful chronicle of this quintessentially American city's mid-century cultural heyday."

Anthony Heilbut, author of Exiled in Paradise and The Fan Who Knew Too Much:
"This is a book as startling as the place it celebrates: Chicago, the town where a gay puppeteer transformed children's television and thereby, their imagination; the burg where post-war comedy, cuisine, urban politics, and pre-marital sex were all changed, changed utterly. Dyja gives unforgettable voice to dozens of out-sized personalities, from Sun Ra to Studs Terkel, from Gwendolyn Brooks to Nelson Algren, from Mahalia Jackson to Muddy Waters, from Richard Daley to Adlai Stevenson, a cast worthy of a Tolstoy or Dickens. In his wonderful book, Chicago stands revealed as both America's most corrupt city and its one, true homeland of the soul."

Edward Glaeser, author of Triumph of the City:
"Thomas Dyja has written a wonderful book about the cultural cauldron that seethed in 20th century Chicago. The Third Coast reminds us that New York and Los Angeles hold no monopoly on American artistic genius. From Louis Sullivan to Richard Wright, from Mahalia Jackson to Nelson Algren, Chicago attracted and inspired talent. Dyja's well-crafted exploration of Chicago creativity helps us understand why cities are the wellsprings of culture. American society was molded by its cities, and Chicago has played an outsized role in molding music and literature and architecture. Dyja's engaging writing not only provides an insightful investigation of Chicago's cultural heroes, but also delivers a broader view of how cities shape the sea of civilization."

Michael Kimmelman, author of The Accidental Masterpiece:
"Thomas Dyja's The Third Coast is a wonderful, beautifully-written, eye-opener and genuine page-turner about Chicago, as sweeping and astonishing as the city itself. It does nothing less than help rewrite postwar American history and culture and cure our bi-coastal myopia. It links half-a-century's worth of economic and social changes with cultural revolution, racial strife with sexual upheaval, architecture with politics, literature with gospel music, Hugh Hefner with Tina Fey, Mies van der Rohe with Mayor Daley, Ray Kroc with Katherine Kuh—it's the whole grand, messy American story, lived through bigger-than-life characters in a bigger-than-life city."

Bob Marovich, Host of "Gospel Memories," WLUW Chicago:
"In The Third Coast, Thomas Dyja chronicles Chicago's estimable contributions to American culture with the colorful prose of Nelson Algren and the humanistic wisdom of Studs Terkel. He puts you at street level with the men and women whose talent and entrepreneurial chutzpah combined to give Chicago, and the nation, its postwar swagger."